In the last couple of months, we've had to drive from NYC to New Hampshire and Vermont, and I'm pretty excited about the stops we've discovered, not far off of the highway.


(Update: Unless I've said I've eaten here, I cannot vouch for the food. I have a friend who went to the Miss Bellow's Diner after reading about it here, and she got food poisoning. We didn't eat there--we did just like the way it looked, but still, I will make more of a point of making it clear when we have eaten at a place. I'm so sorry Sue! ) 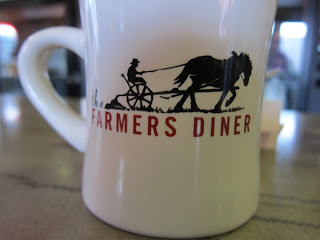 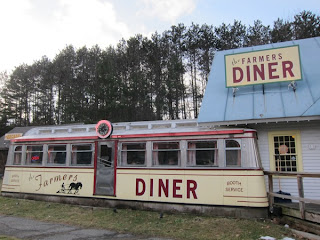 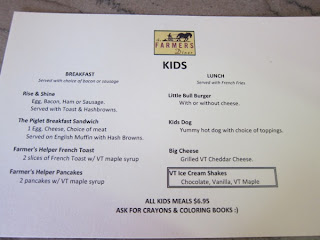 (Near White River Junction, off of I-91)
Farmer's Diner: This is just about 10 minutes off of the highway, and is a great organic-ish/local-ish place to get breakfast or lunch. It's in a shopping center that has a good antique mall (with a toy museum in the basement), and also a place to pick up lots of local cheeses, jams, and maple syrups.

(Near Rockingham/Bellows Falls exit off of I-91)


The Vermont Country Store in Rockingham: This is not the original store, which is much more charming, but this has the same products, and the same massive amount of samples for the taking. Plus delicious Vermont coffee that you can take to go. This is just 5 minutes off of I-91. 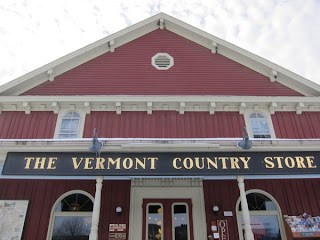 Smokin' Bowls: I know, ridiculous name...but apparently the soup is amazing. It is on the same road as the Vermont Country Store above, and is only open as a soup spot during the fall, winter and spring. I think it turns into an ice cream shop in the summer.
Miss Bellow's Falls Diner: A nice old diner in a railroad car...it seems like standard diner fare...but it has a lot of character, and is just 5 minutes off of the highway. (Update: come here to look at the cool diner, but eat at your own risk. Our friend got an awful case of food poisoning from here.) 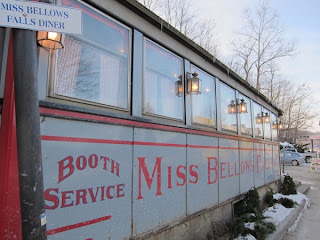 Knowlton's Kitchen: We didn't go here, but it's just across the river into North Walpole, NH, and apparently, it's a fantastic diner.
(Northampton, MA, right off I-91)
Bluebonnet Diner: we didn't eat here, but the reviews look good. Real maple syrup, landmarked diner.
(Whately, MA, right off I-91)
Whately Diner Fillin' Station: we did eat lunch here and the soups (clam chowder and chili) were totally homemade. The waitress was so excited about them she brought me a taste of each...I ended up getting both. It's open 24 hours and is a chrome "Princess" style diner built in 1960. 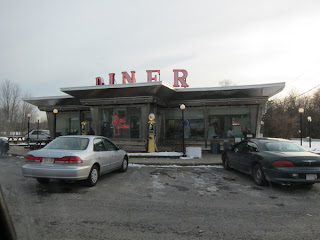 Tom's Hot Dogs is in the same town, and gets big thumbs up from Roadfood. The reviews bring up a good point, that there isn't a bathroom, and if it's cold out, you'll be eating in your car, as it's take-out only. But if you're in the mood for a hot dog and great fries, it's good to know about.
If you're driving up in spring or summer, the North Hadley Sugar Shack looks amazing. Maple soft-serve ice cream! Homemade donuts!
(Near Hartford, CT)
Pepe's Pizzeria is in Manchester, and isn't directly off of I-91, but looks worth the 5-10 minutes detour.
Maine Fish Market, a seafood stop in E. Windsor, CT, a half mile off the interstate.

(The Berkshires-yes, this is a detour--we decided not to take the interstate all the way on the way up, and took the Taconic instead. It adds about an hour to the trip but we wanted to mosey.)
Rubiners in Great Barrington, MA...probably one of the best edited small grocery stores I've been in...and then the cafe in the back, Rubi's, is perfection. Delicious sandwiches (we loved the Reuben) and soups, and desserts. 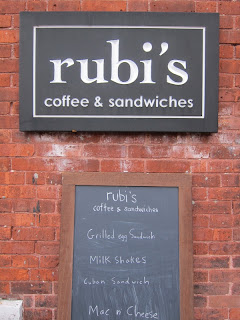 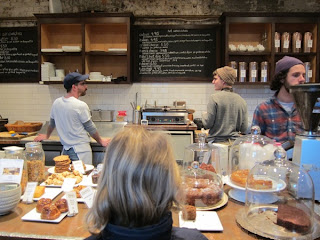 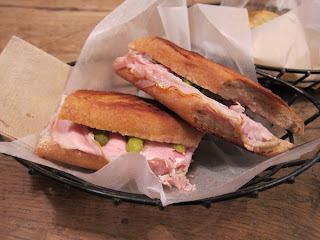 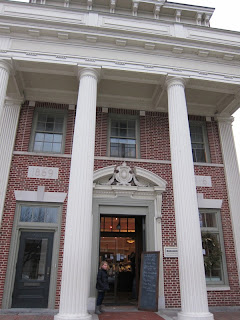