Sitting in the Big Seats 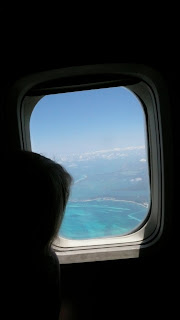 We are just three in our family, so the concept of using miles for tickets, and occasionally getting upgraded seats, isn't completely an impossible fantasy. For domestic travel. For international travel, we wouldn't even try. But we were wrong, it can be done. Here's what happened: We're heading to London this week for our friend's 40th birthday and Clara's 7th birthday, and when I started looking into flights about a month ago, everything was around $600 plus for coach seats. Matt is a Delta guy, and wanted to get miles by flying them, but I really don't like flying internationally in coach on American carriers, because I just don't think the service is as good. For a trip to London, coach on Virgin Atlantic, British Airways--so much better. I looked into my credit card's "thank you points" to see how much I could redeem a ticket for, and it was something like 90,000 miles in coach for one seat. Ridiculous. Then I looked at this cool site called Webflyer, and learned that Virgin Atlantic is affiliated with Amex, who we have plenty of miles with. Next step I called Virgin Atlantic, and spoke to a very nice woman, who informed me that I could fly in coach for 45,000 miles, or in Upper Class (I'll talk about that next Monday when I can show you pictures of the experience) for 90,000 miles. And there were three seats available, for the dates we wanted. I was stunned.  This never, ever happens. All I had to do was join the Virgin Red mileage program, then call up Amex, tell them to dump 270,000 miles (I know that sounds like a ton, but we had so many miles and were just so happy to be able to use them for tickets that would cost normally over $5000 a piece) into our new Virgin Atlantic program, and we did have to pay the taxes on the flights, which worked out to be around $500 a piece. This all happened within 20 minutes, I kid you not.
For more inspiring upgrade true stories and tips, check out this Wendy Perrin piece which was recently in Conde Nast Traveler. I really had given up on using miles for any kind of international travel, and now I see I was just going about it the wrong way.
at 9:14 PM