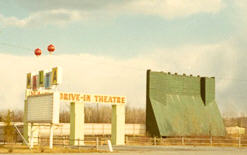 This summer is going to be our year to make it to a drive-in. But since there isn't a drive-in near where we live, I'm scouting out all the drive-in possibilities near where we might be going, so we could bundle a movie into a visit to grandma, or a road trip. Then, as I'm doing it, I've been finding places I just have to include, because they're too awesome not to.

Warwick Drive-in: This is just off of Hwy 17, so it's easy to stop at on the way to the Catskills.

Circle Drive-in in Scranton, PA. We drove by this once, and it looked really kept up.

Fairlee Motel and Drive-in: their website says it's only 1 of 2 motel/drive-in combos in the country. It was built in 1950, and is close to I-91 in Fairlee, Vermont. I love the menu which is simple burgers and popcorn, but the beef comes from their NH farm, the butter is Vermont Cabot, and their onions and fries are Brew City.

Kelloff's Best Western Movie Manor: I guess they didn't know about in-room movies, because they are hawking the fact that their motel faces a huge outdoor screen, and they have speakers that pipe in the sound into the room. It's so weird it's genius. Monte Vista, Colorado

About an hour into my research, I found the definitive site on drive-ins. The only problem is, it's a little sad and reads like an obit column, as so many are gone. But, you can look up by state and find what still exists.

Email ThisBlogThis!Share to TwitterShare to FacebookShare to Pinterest
Labels: Drive-ins