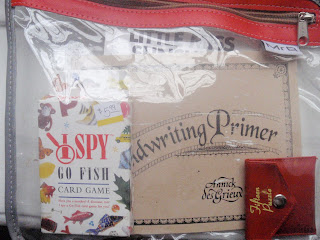 We haven't flown in months--and we are off to Los Angeles and Santa Barbara tomorrow for a week. I had to re-do our travel activity kit, since Clara's interests have evolved.  I'm trying to put together enough things so that it will work for the flights both ways, and restaurants. I'm putting in I-Spy , this Fifteen Puzzle , an old handwriting primer (it's old school with nice cursive--we'll see if that's successful), and while there are Little Miss books pictured here, we're going to sub them out with the paperback Little House on the Prairie , which we're going to go buy right now. I'm putting everything in this clear Mr. B bag, because it's easy to see whatever is in it.  Mr. B isn't in business anymore, but a ziplock would do just fine. 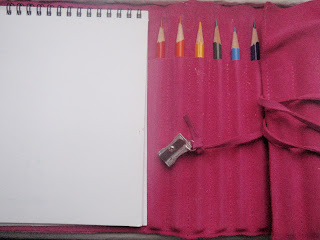 I also love this suede notebook --I just had to replace the notebook since the other one was full, and made sure all the pencils were sharpened. 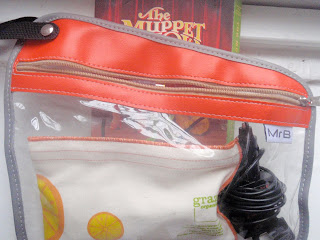 Another task for today is the charging of the DVD player.  While I'm pretty sure that Delta will have the in-flight entertainment system in the seatbacks, sometimes the programming they have isn't appropriate for Clara, or it has some kind of malfunction.  I'm also notorious for forgetting the charge it, or not bringing the plug, or the headphones.  So I am taking care of all of this today, so hopefully it all goes smoothly tomorrow. I've learned to always bring the wall plug and the car charger, as you never know what you'll end up needing. 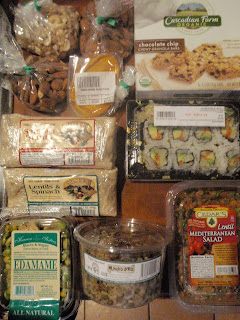 I made a stop at the food coop and picked up food for the three of us for our 6 hour flight. Every time I do this, I end up with leftovers that we end up putting in the hotel mini-bar, and are always so happy we have it.  We do the same thing on the way back from wherever we are--usually we stop at a Whole Foods and head straight for the buffet or the prepared foods section.  You just have to remember not to buy water, or anything liquid like yogurt, because there's nothing more annoying than throwing out something and then buying it again after you go through security.
at 9:25 PM